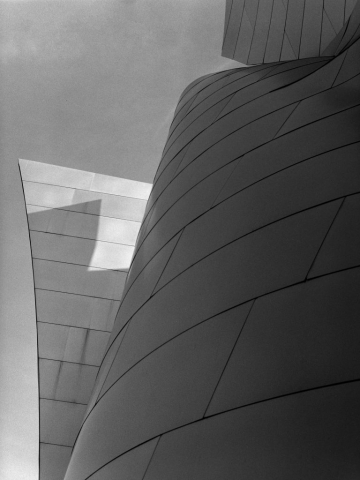 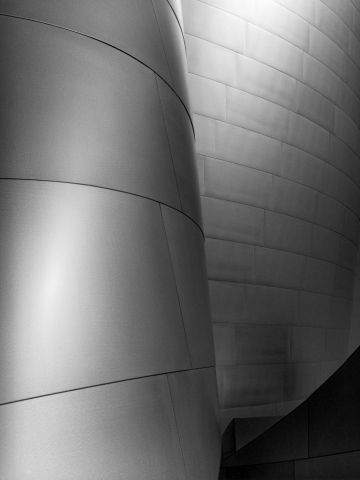 While going through some of my negatives and slides, I found a few images that I took of the Walt Disney Concert Hall in downtown Los Angeles. I decided to scan the images and share them here.

I’m a fan of Frank Gehry and I think the concert hall is an amazing piece of artwork. I always avoided taking pics of the building though. For some reason, I thought it was a cliché thing to do because it’s one of the most photographed buildings in downtown LA. On any given day, you will find tons of photographers there taking pictures. For that reason, I always shied away from taking pics of the building. Soon I started to realize how ridiculous it was of me to think that way. I sometimes have to remind myself that I shouldn’t keep from taking pictures of something, regardless of what it is, from fear that it’s been photographed too much or could be considered cliché. The photos will be cliché only if I decided to create cliché photos.

When I finally decided to take photos of the concert hall, I said I’d try and capture the lines and angles of the building. I figured I could accomplish that by zooming in a bit and focusing on the building’s curves. Because the exterior of the building is made of stainless steel, I also wanted to see if I could capture the light and shadows that are naturally created when lit by the sun. For me, that’s one of the things I enjoy most about the concert hall. I think it’s really cool the way light and shadows play off of the curves and angles of the building.

I’m sad to say that I haven’t been back to take more pictures. After reviewing these images, I think I’ll have to revisit the concert hall and see if I can capture it in a different way. I was really pleased with the images I took, but I think I can push myself to try something new.

The images were taken with my Mamiya 645AFD medium format camera. The film I used was Ilford HP5 black and white film and Fuji Provia 100f color slide film that I converted to black and white.